In industrial automation, Open Platform Communications Unified Architecture (acronym: OPC UA) is often used as a communication protocol for machine-to-machine. It is becoming increasingly important today, with the ever-faster introduction of IoT and Industry 4.0 to applications such as FA robots.

OPC UA is an international standard that is positioned as a standard for the communication layer in Industry 4.0. It enables interaction between different operating systems and devices from different manufacturers, and it is a reliable means for platform-independent data exchange without compromising security. OPC UA is already widespread in countries like Germany and the USA, which strongly promote the Internet of Things, as the ‘de facto’ standard. 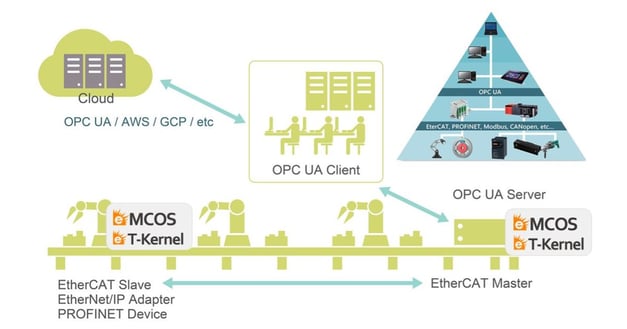 The OPC UA server, which controls the entire system, is implemented in control devices such as PLCs. The OPC UA server software in industrial plants traditionally runs on a conventional operating system such as Linux or Windows. However, these operating systems do not support applications with hard real-time requirements. By using the RTOS platform from eSOL, it is possible to create real-time control systems with OPC UA servers.

This facilitates and accelerates the introduction of IoT practices in existing and new real-time control systems while providing the safety performance required for these applications.