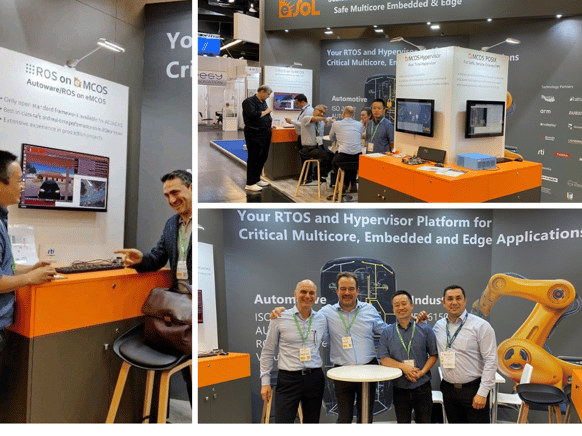 Developing the theme “Your RTOS and Hypervisor Platform for Critical Multicore, Embedded and Edge Applications”, eSOL was also present at the show’s conference on Thursday 23rd of June. Rolland Dudemaine presented a well-attended session entitled “Embedded OS Trends: The Future of Automotive SW Partitioning in Connected and Autonomous Vehicles.”

Visitors to the company’s booth were keen to talk to eSOL experts and learn about the company’s eMCOS multikernel RTOS platform, which offers the highest safe RTOS performance on multi/manycore systems with no performance bottlenecks.

The company has been offering microkernel RTOSes since 1984, and since 2005 the eT-Kernel (TRON T-Kernel Standard API), which is often used in automotive or industrial applications. The modern multikernel RTOS architecture gives each core of the CPU its own lightweight microkernel. All microkernels communicate with each other without mutual blockades by asynchronous messages, reducing IPC latencies to the technically possible minimum.